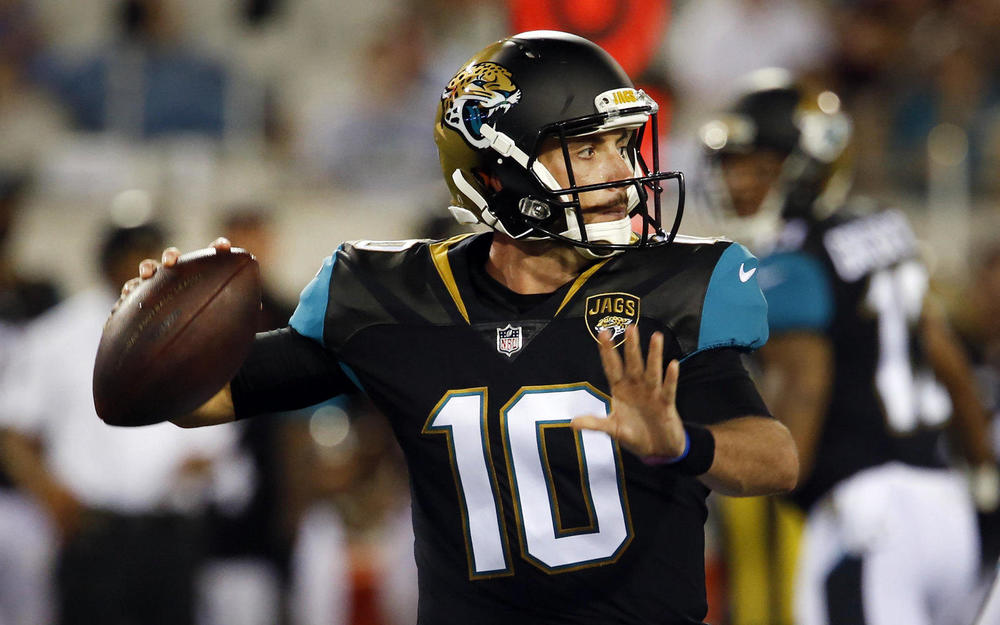 *Although a Player is active that doesn't necessarily mean that they will start or guarantee playing time..

Saturday Night/ Early Sunday Morning Notes (The Weekly Player Projections takes all of the information below into consideration, any late breaking news that differs from the expectation below is not included):

Tannehill,Ryan - MIA/QB: Tannehill (Right Shoulder) appeared on the Dolphins' injury report on Friday, putting in a limited practice. Not much information was disclosed as to whether an injury occurred or if this was a precaution.

Cook,Dalvin - MIN/RB: Cook (Hamstring) put in a limited practice on Friday after fully practicing on Thursday. He is listed as Questionable and sounds like he may be a true game-time decision. We think he's leaning active as of now.

Freeman,Devonta - ATL/RB: Freeman (Foot) has been ruled Out for Week 6. Tevin Coleman will get the start and is a low RB1 in this matchup. Ito Smith will receive carries as well, including red zone carries. Smith is a viable RB3/FLEX play.

Lynch,Marshawn - OAK/RB: Lynch (Hip) was limited in all three practices this week but is not on the team's injury report.

Bernard,Giovani - CIN/RB: Bernard (Knee) has been ruled Out for Week 6. Joe Mixon will start and see almost all of the running back work. He is a low RB1 this week.

Crowell,Isaiah - NYJ/RB: Crowell (Ankle) is Questionable for Week 6 after putting in one limited practice this week. Ethan Greenburg of newyorkjets.com quotes Head Coach Todd Bowles as saying, "It'll be a game day decision so we'll work him out Sunday and see where he's at." Despite a huge week vs Denver, Bilal Powell out snapped him and would be in line to see a big workload if Crowell misses.

Mack,Marlon - IND/RB: Mack (Hamstring) fully practiced all week and is not on the Colts' injury report in Week 6. He is likely to start, but with Nyheim Hines and Jordan Wilkins also expected to receive work, it might be difficult to predict who will come out on top.

Miller,Lamar - HOU/RB: Miller (Chest) was able to fully practice on Thursday and Friday and will play today after not appearing on the Week 6 injury report.

Peterson,Adrian - WAS/RB: Peterson (Shoulder/Ankle/Knee) is Questionable after having three limited practices this week. The current thought is that he will play.

Richardson,Paul - WAS/WR: Richardson (Shoulder/Knee) was able to log a limited practice on Friday, his first of the week. He is Questionable for Sunday's game vs Carolina. Richardson sounds like he will be a game-time decision, so monitor his warm-ups on Sunday morning.

Crowder,Jamison - WAS/WR: Crowder (Ankle) is Questionable after not practicing at all this week. That is usually not a good sign for a player if they can't get a limited practice in all week. Even if active, I would keep Crowder on the bench until we see him healthier.

Hopkins,DeAndre - HOU/WR: Hopkins (Foot) put in three limited practices but will play Sunday after not appearing on the Houston injury report. Fire him as a WR1 against the Bills.

Fuller,Will - HOU/WR: Fuller (Hamstring) did not appear on the Texans' final injury report, despite putting in three limited practices this week.

Coutee,Keke - HOU/WR: Coutee (Hamstring) put in three limited practices this week but is not on the Texans' injury report for week 6. He's a nice WR3 option right now after seeing 22 targets the past two weeks.

Higgins,Rashard - CLE/WR: Higgins (Knee) will miss Week 6 with a knee injury. Antonio Callaway should see more snaps after Higgins moved ahead of him on the depth chart last week.

Benjamin,Travis - LAC/WR: Benjamin (Foot) remains Out for the Chargers in Week 6. Tyrell Williams and Mike Williams will start in his place.

Baldwin,Doug - SEA/WR: Baldwin (Knee) fully participated in all three practices this week and is not on the injury report.

Fitzgerald,Larry - ARI/WR: Fitzgerald (Hamstring/Back) progressed each day and did not end up on the Cardinals' injury report. He will play in a homecoming game for him in Minnesota today.

Sanu,Mohamed - ATL/WR: Sanu (Hip) fully practiced Friday after being limited the first two days this week. He is not on the injury report and would be a low WR2/high WR3 in this potential shootout vs Tampa Bay.

Hilton,T.Y. - IND/WR: Hilton (Chest/Hamstring) remains Out for the Colts this week. Expect heavy usage again for Chester Rogers, with other production going to Ryan Grant and Zach Pascal.

Grant,Jakeem - MIA/WR: Grant (Shoulder) was able to fully practice on Friday after practicing on a limited basis on Wednesday and Thursday. He is Questionable to go but should play after a full practice.

Parker,Devante - MIA/WR: Parker (Quad) put in a full practice on Friday, after two limited practices earlier in the week. He is Questionable for Miami on Sunday. He's still not viable in fantasy, as he has been inactive recently.

Miller,Anthony - CHI/WR: Miller (Shoulder) practiced fully this week and will play on Sunday in Miami. He's still more of a bench stash player but could be used in deeper leagues.

Howard,OJ - TB/TE: Howard (Knee) fully practiced on Friday and is Questionable for today's game in Atlanta. He was thought to be out for this game after spraining an MCL two weeks ago. Even if he plays, he may limited, but could be considered in the potential shootout in Atlanta.

Vannett,Nick - SEA/TE: Vannett (Back) has only put in one limited practice this week and is Questionable for Week 6. Head Coach Pete Carroll says that Vannett will play and there is only one other TE on the Seattle roster. This game is in London and is a 1:00 pm start. We will know by roster lock his status.

Kroft,Tyler - CIN/TE: Kroft (Foot) has been ruled Out for the Week 6 game vs the Steelers. C.J. Uzomah will be the starting TE and is a low TE1 vs a Steelers team that has struggled against tight ends this season.

Ebron,Eric - IND/TE: Ebron (Shin) missed practice on Wednesday and Thursday but practiced fully on Friday. He is listed as Questionable but fully expected to play.

Doyle,Jack - IND/TE: Doyle (Hip) will miss Week 6 vs the Jets. Eric Ebron will continue to start at TE for the Colts.

Olsen,Greg - CAR/TE: Olsen (Foot) put in two full practices to end the week and is Questionable for Sunday's game in Washington. David Newton of ESPN quotes Ron Rivera as saying "As of right now, yes" when asked if Olsen would start on Sunday.

Fournette,Leonard - JAX/RB: Fournette (Hamstring) will miss Week 6. T.J. Yeldon will get the start and should see most of the workload vs Dallas. He's a low RB1 with his expected volume.

Cooks,Brandin - LAR/WR: In a pleasant surprise, Cooks (Concussion) passed the protocol and fully practiced on Friday. He is not on the Rams' injury report and will start on Sunday in Denver.

Kupp,Cooper - LAR/WR: Kupp (Concussion) passed protocol and practiced fully on Friday. He is not on the Rams' Week 6 injury report and will play on Sunday.

Michel,Sony - NE/RB: Michel (Knee) was limited all week and is Questionable for Week 6 vs Kansas City. We don't believe he's in danger of missing at this point.

Gordon,Josh - NE/WR: Gordon (Hamstring) was limited in practice all week but is Questionable. It looks like he will start though and seems to be building a nice rapport with Tom Brady.

Gronkowski,Rob - NE/TE: Gronk (Ankle) is Questionable after three limited practices this week but is expected to play on Sunday Night.

Breida,Matt - SF/RB: Breida (Shoulder/Ankle) Breida put in a limited practice on Saturday which makes him a game time decision, although it was a positive sign to see him practice late in the week. Alfred Morris could make for a good play this week, if Breida is inactive.

Cobb,Randall - GB/WR: Cobb (Hamstring) was limited in practice on Thursday, Friday, and Saturday. It's a risky play, as fantasy owners won't have many replacement options on Monday night.

Allison,Geronimo - GB/WR: Allison (Hamstring) was limited in practice on Thursday, Friday, and Saturday. At this point, we believe that he is leaning active.

WR Dante Pettis SF (knee): Pettis hasn't practiced this week, and by all indications will be inactive again this week.

Kittle,George - SF/TE: Kittle (Knee) was limited at practice on both Thursday, Friday, and Saturday. We expect him to be active on Monday Night.

For the latest up to the minute weather forecasts for each game, check out NFLweather.com

MyFantasyFix has Helped Subscribers Win Thousands of $$ this season!

· Fully Exportabable CSV Lineups - Planning to mass multi-entry? Our optimizer is designed to export your personal, customized lineups into the format for the site you're playing. Simply download from our site and upload to theirs (DraftKings or FanDuel).

Best part of all, it's so simple. Either use the default Optimizer Setting, or use your own variations, Click on the Optimizer button, View the lineups, and either upload the lineups to Draftkings/Fanduel, or enter them yourself. Done.

Try it for FREE for the first 14 days! Even better, as a current or former Fantistics customer, we would like to extend a 30% discount as a way of thanking you for your loyalty. Register today for the rest of the NFL season for only $69.95 using this Promotional Coupon Code: FANTISTICS30

Anthony A. Perri is the founder and the resident "Stats Nerd" at Fantistics. Anthony is the designer of the Fantistics Projections, Grading, & the VAM drafting strategy models. His fantasy expertise has been published in several national publications, inc