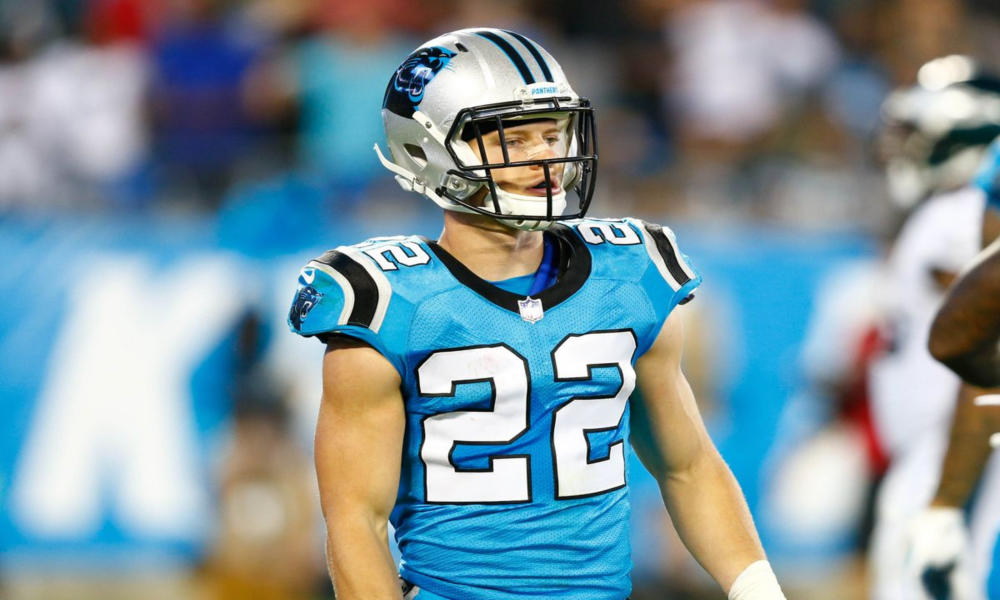 Who had Jacksonville/Tennessee as the highest scoring showdown slate game going into last week? I thought both night games would have limited points; but I didn't think it would result in the two lowest primetime showdown slate scores all year. 90.1 won on Sunday Night, and 91.57 won on Monday Night. I don't think we will see a repeat of that this weekend as we have a couple of high powered offenses going up against easier defenses than we saw each face the last time they had a primetime night game.

Carolina ranks 8th in DVOA vs the Rush and 29th vs the Pass. Against individual positions, they rank 5th against WR1, 32nd against WR2, 21st against Other WRs, 30th against TE, and 10th against Pass-Catching RBs.

On paper, this looks like a good spot for Drew Brees (10,800), but the concern is this game is on the road, where he has averaged 10 fewer fantasy points than at home. He also hasn't really had great games in Carolina, with only two games in his career throwing for 3+ TDs (one was last year). This is probably the worst Carolina defense he has faced in recent times. I don't mind him here simply from a floor perspective, with some ceiling. However, fading him isn't the worst idea either. Alvin Kamara (9,400) is seeing 15-20 touches per game lately: He just hasn't seen the touchdowns (none in the last three weeks). He had some big games against Carolina a year ago and it's only a matter of time until he breaks through. Carolina's ability to limit pass-catching RBs is a slight concern, but Kamara under 10k seems like a slight value. Mark Ingram (7,200) is seeing 40-45% of the offensive snaps, while Kamara has consistently been around 60-65% of the snaps. Ingram is one I would prefer against weaker rush defenses; something Carolina is not. The 2200 savings is nice and I would like to play Kamara instead (and would play if price isn't an object). However, based on my lineup build elsewhere, I won't be surprised if I ended up with Ingram over Kamara.

Michael Thomas (11,000) seemed to return to a normal usage last week, catching 11 of 13 targets. In the three games against Carolina last year, Thomas scored in two of them, and went for 131 in the playoff game without a TD. We've seen a recent trend of WR in the captain spot be the winning formula, and Thomas will be one I list below. After Thomas, good luck figuring out what WR produce. When active, Tre'Quan Smith (5,400) is clearly seeing the 2nd most snaps at the WR position. The issue is he isn't being targeted. Keith Kirkwood (3,000) is a viable dart play, hoping the Saints throw more. If value hunting, Josh Hill (400) has been seeing more than 50% of the snaps; but yet, like Smith, he's not seeing targets. But at 400 and against a Panthers team that struggles against the position, he's a very viable punt. The Saints Defense (3,400) is in play, as they have five straight games of multiple sacks and four of those games have included multiple turnovers. Cam has 12 picks on the year, but Carolina is bottom seven in sacks allowed. Will Lutz (3,600) hasn't gotten to 10 fantasy points in the past three games. I don't mind him if you think this is a shootout, but think I would go with Saints Defense at this price level.

New Orleans ranks 3rd in DOVA vs the Rush and 20th vs the Pass. Against individual positions, they rank 25th vs WR1, 31st vs WR2, 7th vs Other WR, 7th vs TE, and 30th against Pass-Catching RBs.

Cam Newton (10,000) has been dealing with injury concerns. Though he fully practiced on Saturday and wasn't on the injury report, we saw his numbers greatly diminished last week. I know he has put up huge numbers in the SuperDome but hasn't had the same success at home. I don't think he's fully healthy and a matchup against a tougher Saints defense isn't somethign I'm too interested in. My favorite Panther (probably with many others as well) is Christian McCaffrey (11,600). The Saints struggle against pass-catching RBs, CMC's strength. In three games last year vs NO, here were his DK Point totals: 23.7, 15.9, and 26.7. He's also seeing more rushes right now (around 15 a game). He will be popular so there's always merit in fading him in a one-game scenario. I just don't think I will be able to do so..

The clear top two receivers right now, seeing nearly every snap count is D.J. Moore (8,000) and Curtis Samuel (6,400). Comparing targets for the past four games, Moore has seen 33 targets, and Samuel has seen 28. Both have had double-digit fantasy points in the last four games. Samuel's points are a little more TD heavy, but I think I like him more at the 1600 savings. Moore is also more likely to see Marshown Lattimore, though that's not as tough of a matchup as it was a year ago. Playing both may not be the worst move either, if stacking Panthers. Who has seen the third most snaps? Not Devin Funchess (5,800) but Jarius Wright (2,400). Wright is seeing about 3-4 targets a game. He's hit 5 fantasy points in four of his last five games (over 2x salary). You're hoping for a TD to really justify this play, but has a pretty good floor at this low price. Ian Thomas (4,800) has been a name thrown about in season-long playoffs this week, as he saw 11 targets a week ago. The Saints have been quite stingy against the position, though they did allow a TD to Cam Brate last week. I feel like this is a classic situation of chasing points with Thomas, so he will be a pass for me. I don't have any interest in the Panthers Defense (2,600) or Chandler Catanzaro (3,200).

The Rams rank 24th in DVOA vs the Rush and 6th vs the Pass. Against individual positions, the Rams are 21st against WR1, 6th against WR2, 25th against all other WR, 6th against TE, and 5th against Pass-Catching RBs.

I'm writing up this game on Thursday night, so we don't know for sure who will be the starting QB for the Eagles. I'm going to assume that it will be Nick Foles (8,600). He only had one TD in the first two starts of the season, though he did throw over 300 yards in week 2 against Tampa Bay. If we go back to last year, he did have three games where he threw for 3+ touchdowns. However, this is a tough spot against the Rams. If you are playing Foles, you are playing on volume and hope that he finds a couple of touchdowns. I have some interest in Foles. If it's Carson Wentz (9,000), I don't want to risk it as we really wouldn't know how he feels or how long he would last. The Eagles RB situation was a little more clear last week. Darren Sproles (3,800) led the team with 44% of the snaps. He provides good value in Draftkings PPR scoring at the price, but worry about his upside. Josh Adams (4,800) saw 40% of the snaps, and only saw 7 carries last week. We saw Jordan Howard rush for a 100 yards against this Rams team last week and this would appear to be an Adams type of game. I don't even think playing both Adams and Sproles is the worst combination and get all the production at RB.

The receiving options are clear cut, with one surprise. Zach Ertz (8,800) continues to see 8+ targets a game. Ertz saw similar target numbers with Foles last year and while the Rams have good numbers against the position, they have given up some big games to TEs this year (Jared Cook Week 1 comes to mind). Alshon Jeffery (7,000) was another popular target for Foles a year ago, and we him get 9 targets a week ago. While he may see Talib a bit, I don't think it's a horrible spot. We haven't seen #1 WR's this cheap in Showdown very often and feels like a spot you may want to take advantage. This surprised me when I looked this up: Nelson Agholor (4,200) has outsnapped Golden Tate (6,000) significantly the past few weeks. However, Tate is seeing more targets. I still prefer Tate in the PPR format, but would prefer Jeffery for 1,000 more. Dallas Goedert (2,400) is seeing 50% of the snaps each week, and is seeing about 3-5 targets. As a last option to round out a roster, I don't mind taking a chance on him. Jake Elliott (3,000) doesn't have more than 11 points in a game and I don't know if I want to go here with him. I'll pass and take Goedert for 600 cheaper if punting.

I wasn't on Jared Goff (11,600) last week for two reasons: The Bears Defense and his struggles on the road. Coming back home should help, as he has averaged 30.8 DK Points at home this season. This Eagles secondary has suffered so many injuries in the past month, that Goff should have a field day. I would be surprised if he doesn't get 300+ yards, as this is a perfect bounce back spot after a couple of tough road games. Todd Gurley (12,400) had his worst game of the season in Chicago last week. This is a much better spot, as the Eagles have been getting more generous in RB production, especially through the air. Expect Gurley to get back involved this week. I'll probably be starting my lineups with Goff and Gurley and building it from there. This approach should get me all of the Rams TDs, with potential for a double up or two if Gurley gets a receiving TD.

From a strategic standpoint, I like that DraftKings priced up Robert Woods (9,800) as he's seen double-digit targets in two of his past three games. However, he hasn't seen double-digit points since Week 6. While he has the best matchup and highest floor of the Rams WRs, I think it's hard to justify paying this price for him. Same with Brandin Cooks (9,600); however, his fantasy production is very similar to Goff, as far as being much more productive at home. In tournaments, I don't mind taking a chance with Cooks if fading Gurley. But, price considered, I would rather have Gurley. Josh Reynolds (5,800) has seen 11 catches on 20 targets in the last three games. He's an ok play, but I think I would prefer the Eagles WRs here, as they should see more volume. There's a case for the Rams Defense (4,600), especially if Foles plays, as the Eagles allow just under 3 sacks a game. But Foles doesn't throw many interceptions, potentially ruining the upside there. I can go back to Greg Zuerlein (3,400), as he has no game with fewer than 8 fantasy points. His strong leg also gives him 50+ yard FG potential.