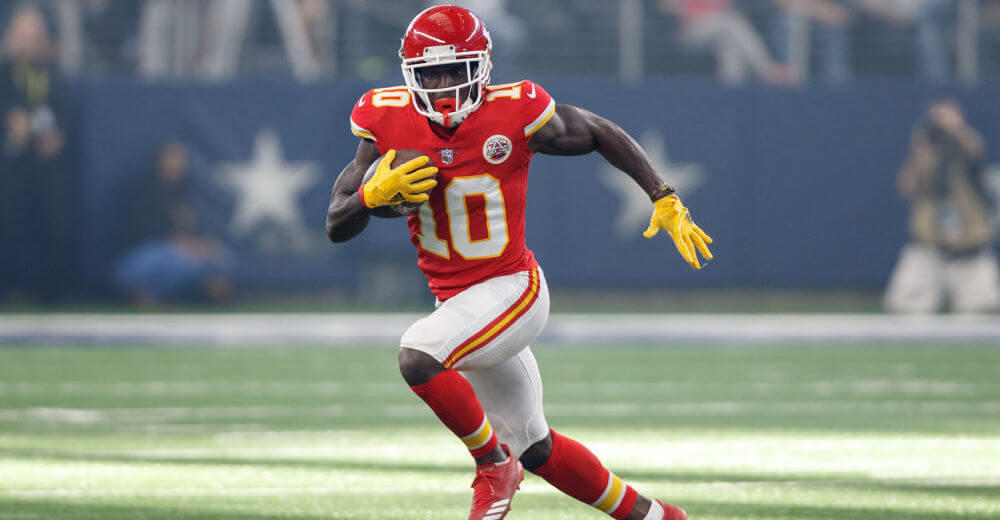 It's an AFC West primetime week with the Chargers playing on Saturday Night, the Chiefs on Sunday Night, and the Broncos and Raiders on Christmas Eve. One note: There will not be a Week 17 Showdown Slate article. I will be back for the Playoffs to look at those games from the Showdown perspective.

Oakland ranks 27th DVOA vs the Rush and 31st vs the Pass. Against Individual Positions, they rank 1st against WR1, 16th against WR2, 29th against Other WRs, 32nd against TE, and 17th against Pass-Catching RBs.

Before I get into the players, I was shocked to see Oakland rank #1 vs WR1s. Also, there looks like there could be some rain and some moderate winds (15-25 mph according to National Weather Service). Case Keenum (10,800) has only thrown for more than 2 touchdowns in a game once all season: Week One (3 TDs). Recently, he's been hanging around the 13-15 point range. That just isn't high enough for me to want to pay that amount, even in what could be a lower scoring game, and especially not if the field is wet due to a lot of rain. Naturally, that has me looking at Phillip Lindsay (12,200), who did have 107 yards in the first matchup back in Week Two. Despite only seeing 14 carries in recent weeks, he has seen 13 targets the past two weeks. He is leading the Broncos backfield and is probably best chance at a TD. However, his share some weeks isn't dominating. We are still seeing about 20% snap share each for Royce Freeman (1,600) and Devontae Booker (1,400). Freeman is more of the rusher, while Booker is the pass-catcher. If weather is as bad as expected, I would prefer Freeman and hope that he gets a goal line carry or two to hit value.

Out of all of the receivers, Daesean Hamilton (8,000) has been seeing the most targets with 21 the past two weeks. Tim Patrick (6,800) has seen 18 targets in that timespan, with Courtland Sutton (7,400) seeing 12 targets. Sutton is out for me, as I suspect he will be popular, especially among the casual players. Hamilton and Patrick are the preferred options if targeting the passing game, with the 1,200 savings on Patrick my top option. He should be lower owned than Hamilton as well. Matt Lacosse (4,200) is Questionable and did see six targets last week. Oakland really struggles against the TE position, so a gamble on Lacosse isn't a bad idea. If he misses, Brian Parker (400) saw the second highest snaps at TE last week. At 400, I would have interest. Bad weather and field conditions will have me off of Brandon McManus (3,600). But, I would have great interest in the Denver Defense (5,200) who will force turnovers and get a couple of sacks along the way. They didn't turn Oakland over and only had one sack back in Week Two; however, I would expect a better outing this week.

Denver ranks 11th DVOA vs the Rush and 3rd vs the Pass. Against Individual Positions, Denver is 9th against WR1, 13th against WR2, 2nd against Other WRs, 14th against TE, and 20th against pass-catching RBs.

Derek Carr (10,000) has been six points better at home this season. His past two games at home had him at 285/3 and 322/2. He's the preferred quarterback in this game. I'm not a big Doug Martin (5,400) fan, as he has only gone over 60 yards three times this season. While I think he will be popular, especially in bad weather, this may be a good strategic fade and hope he doesn't find the end zone. Denver's weakness is pass catching RB, so I do have interest in Jalen Richard (4,400) who is seeing about 6-8 carries and 3-4 targets a game. But by no means, do I think he is someone you need to get into lineups.

At receiver, we have seen an uptick in usage for Jordy Nelson (7,600), who has 26 targets the past three weeks. Unfortunately, he isn't scoring any touchdowns and has a pretty low yards per catch average. I mentioned how Derek Carr was much better at home; yet, he's not as dramatic as Jared Cook (9,800), who averages just under 8 points on the road, and over 20 at home. Denver has given up some big games to tight ends this season, so I don't mind him here. Just realize his floor is low. Outside of that, you can always take a dart on Seth Roberts (2,800) or Marcell Ateman (2,600). Ateman has been outsnapping Roberts by a small margin the past four weeks and has outtargeted Roberts 23 to 20 the past four weeks. Ateman may have the higher floor, with Roberts being the better TD threat. Even if conditions are bad, I don't think I have much interest in the Raiders Defense (3,000) where they only have one game over 6 fantasy points all season. Like McManus, I won't have any interest in Daniel Carlson (3,200) due to the projected soft field conditions.

Patrick Mahomes (12,000) is coming off of his worst fantasy game of the year, scoring only 18 fantasy points. I expect a better outing here as Seattle has been league average against the pass. We saw Nick Mullens throw for over 400 yards in Seattle a few weeks ago and the Rams did put up 33 points earlier in this season. People may buy into the Seattle D at home narrative, especially after that Vikings game on MNF two weeks ago. But, I don't see Mahomes failing here. With Spencer Ware Doubtful, expect to see more Damian Williams (7,000), who saw 73% of the snaps last week. While I don't exactly expect him to score two touchdowns, his 11 targets the past two weeks in the pass game gives him a high floor. At 7k, I think he easily gets to 2x (14 points) with upside for 3-4x as well. Darrel Williams (1,800) did see 25% of the snaps last week and did score the first touchdown of the game. He's not the worst punt play if you need it.

Seattle has struggled against #1 WRs (Dante Pettis comes to mind in that game in Seattle a few weeks ago), which could mean it's a boom game for Tyreek Hill (10,200). He has four games above 35 fantasy points (three on the road) while seeing 7-10 targets a game. Elsewhere, Travis Kelce (10,800) has put up double-digit points in every game except the first this season. While I think he will be involved, I feel like this is more of a Hill game. Kelce is fine, but I'm not prioritzing him at this price. Chris Conley (4,000) has only seen six targets the past two games, but may be able to see more targets against a Seahawks team that does struggle against #2 WRs. I don't think he's a must-play, but is certainly someone you can consider, and is my choice over DeMarcus Robinson (4,200). I don't have much interest in the Chiefs Defense (2,800) and Harrison Butker (3,400) just doesn't have the 3+ FG game recently to make me want to play him. I'd rather pay 600 more for Conley. Lastly, Kelvin Benjamin (2,400) does give big-play upside, but may be hard to trust in his second game with the Chiefs. I would expect him to see more than 12 snaps though if you're desperate.

Kansas City ranks 32nd DVOA vs the Rush and 13th against the Pass. Against individual positions, Kansas City is 10th against WR1, 2nd against WR2, 28th against Other WRs, 25th against TE, and 27th against Pass-Catching Running Backs.

I usually start with the QB here; but with Seattle, it's the running game that is the big deal. In a passing based league, the Seahawks are one of the few teams who run the ball over 50% of the time. You see Kansas City is last against the rush. This leads to the obvious conclusion that Chris Carson (9,000) is someone we want in our lineups. He has seen 20+ touches the past two games, and has scored a TD in four of his last five. Rashaad Penny (3,000) is Questionable, but doesn't sound like he will play. This means Carson should see 20+ touches, especially since this is the best way to keep Mahomes off the field. If Penny is out as expected, I will have interest in Mike Davis (3,800), as he was only outsnapped 39-33 last week. He's also the pass catching back, so if the Chiefs do get in front early, Davis should see the field more often. I like playing both RBs here to capture almost all of the rushing game.

I say most because Russell Wilson (10,400) is always capable of taking some rushes himself. He is incredibly efficient, throwing only about 20-25 times a game, but only having two games this season where he didn't throw a touchdown pass. He's definitely in play if you think this turns into a shootout or Seattle gets behind early. Tyler Lockett (8,200) is probably a better cash game play in all weekend slates, than he is in a showdown slate. He'll probably get 10-15 points, which is under 2x on the showdown slate. Doug Baldwin (7,800) is starting to heat up with four touchdowns in his past four games. He's more of the upside player and it seems like him and Wilson have put up some big games in past years, in the second half of the season. He may go overlooked at this price as well, putting him squarely in play for me. The only other pass catching option I have any interest in is Ed Dickson (200) as a complete punt, as the Chiefs do struggle against the TE spot. This is hoping for a TD at minimum price. I clearly don't have any interest in the Seattle Defense (2,600) and I don't have any interest in Sebastian Janikowski (3,200) who isn't getting many games of 10+ fantasy points.