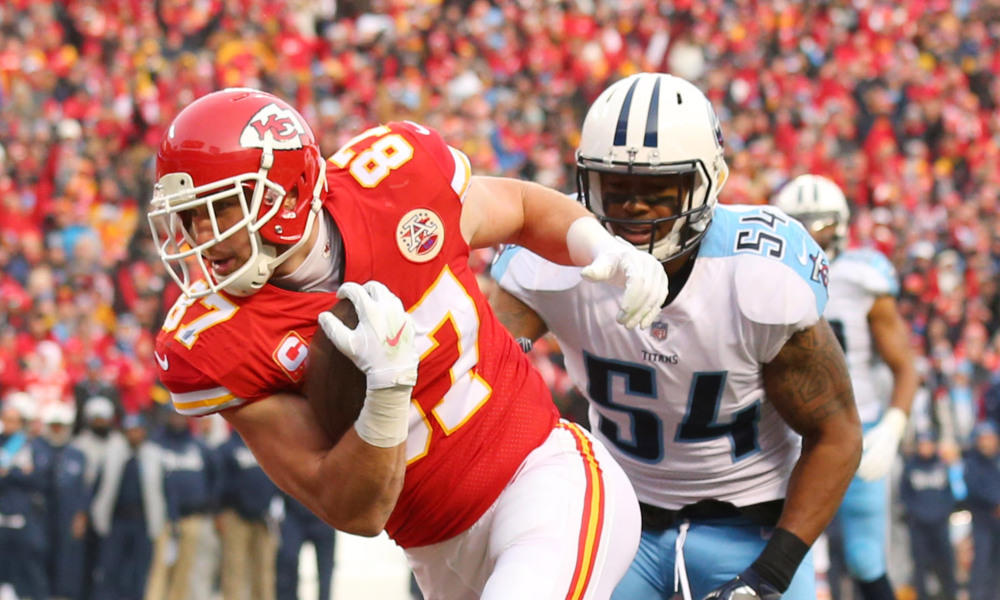 Down to 8 teams in the NFL Playoffs, and in my opinion, this is the best weekend of the season. We hae four teams coming off big wins, taking on the four best teams of the season. We can also focus on one game at a time, meaning the showdown slates are much more popular. The Cowboys-Rams game is the featured game, but I'll write up both games here. I'll do one for the Sunday games as well, likely later in the week.

For as soft as the 4-game pricing is this week on DraftKings, it's that tough in this first showdown slate. Andrew Luck (10,800) may score 4.5 points fewer on the road, but two of his worst games on the road were early in the season. He's been consistently over 20 points most weeks and is a fair price against a Chiefs defense that has given up points most of the year. Luck is definitely in play. With Kansas City struggling against the rush and having a high-potent offense, it would make sense for Marlon Mack (8,400) to be quite busy again this week. He was on the field for 79% of the snaps a week ago and has 24+ carries in three of the last four weeks (leading to over 20 fantasy points). Even his three targets a game gives him some value. The concern though is in Week 16, he only saw 12 carries in a game the Colts had to come from behind in against the Giants. If you think something similar may happen, it may be worth taking a flyer on Nyheim Hines (2,800), who did see 1/3 of the snaps in Week 16, where he saw 5 catches. He's not safe by any means, after playing only 9 snaps last week and letting a lot of fantasy players down. However, if he gets 5 receptions or so, he would smash value.

T.Y. Hilton (8,800) is probably going to be a fade for me. Though he started off hot last week, he really didn't end up with a big week (5/85). He only has one touchdown on the road this year (Week 2 at Washington) and is averaging 15 ponts. At this price, I think it's a little too high, especially since the Chiefs have done well against #1 WRs. Dontrelle Inman (6,200) has been seeing 4-6 targets the past three weeks and is operating as the #2 WR in this offense. Feels like his floor may be around 9-10 points, and could be higher if you think they are coming from behind. Chester Rogers (4,600) or Zach Pascal (1,800) are not bad plays either. I do prefer Rogers but if you need a punt, Pascal is viable at a cheaper price. Perhaps the best option is Eric Ebron (7,800) who is scoring more points on the road. Kansas City's weakness against TEs and his red zone works puts him in a good spot. The concern here though is if he can get to 20 points, to get closer to 2.5x his salary. I think he's a fine floor guy: just not sure if he can get to 20 without multiple touchdowns. I'll continue to pass on Adam Vinatieri (3,200) and the Colts Defense (2,600).

What's nice about the Chiefs is they are pretty straight forward with their plays, but also means its hard to find value with them. The most popular player should be Patrick Mahomes (11,800) in this game. If we are looking at floor, he's got the highest floor. At this price, we know he can get to 30. The question is will he? The past four games, he has not. It may come down to what narrative you want to use. If you think Kansas City score 30+, play Mahomes. If you thing the Colts can limit him like the Chargers and Ravens did, then I think a strategic fade is not a bad move. Damien Williams (6,600) wasn't used much in Week 17, but they didn't need him much against the Raiders. The prior two weeks, he was around 30 points a game. The Colts have been good against the run late in the season (limited Elliott, Barkley, and Henry to end the season), but do give up some production in the passing game. With 18 targets in Weeks 14-16 at this price, Williams is my favorite point per dollar play in this game.

Tyreek Hill (9,800) remains your boom/bust type of player. We saw the Colts limit DeAndre Hopkins last week, so there is that concern. If he goes off for 30 or more, as he has done five times this season, you will have to have him. I don't see myself going with Hill, but I do have a hard time getting him right (which means you probably should play him). Instead, I'll take the better matchup for Travis Kelce (9,400) who has seen exactly nine targets in each of his last four games. The problem: only one touchdown total in that span. It feels like a breakout is coming for him and the matchup fits him well. Sammy Watkins (4,800) is a really nice value if he plays and isn't limited. I don't think that's likely though, as he's either active and on a snap count, or inactive again. If taking a dart in the passing game, I'll take it with DeMarcus Robinson (4,200) who has the big play ability. But, it is tempting to look at Chris Conley (3,800) if Watkins is out, as he is the #2 WR, though the Colts are really good against #2 WR. Harrison Butker (3,400) would be more of a safer play, as he can get about 9-11 points. But, maybe the low owned option here is the Chiefs Defense (3,000), who average nearly 12 fantasy points at home. While the Colts have done a great job protecting Luck, he does have 16 interceptions on the year, and a game at Arrowhead is opposing. I like the Chiefs Defense as a potential upside tournament play.

As a Bears fan, I'm disappointed that I'm not writing them up here, as I was looking forward to a rematch with the Rams. But that being said, I think this will be an entertaining game. I'm going to keep this pretty short for the Cowboys, because I think there is one obvious play: Ezekiel Elliott (11,400). Once my Bears lost and I knew Dallas was playing the Rams, I was waiting to see what Zeke would be priced at in both the 4-game slate and showdown: both are too low. The Rams have struggled against the run and against pass-catching RBs. Enter Elliott who is seeing 20-25 rushes a game, with an additional 6-8 receptions. I always understand game theory arguments about fading someone who will probably be 80-90 percent owned. But, this is a dream spot for Elliott and it's one I just can't pass on.

As far as everyone else: You could go with Dak Prescott (8,600) in hopes he can run one in and maybe throw one to Elliott or catch the Rams napping on the back end. After him though, I don't see much I like. Amari Cooper (9,000) should not be higher priced than Dak and will be a fade for me. There's always something in trying to guess which other RB/TE (Jarwin, Beasley, Gallup) gets the score. The only other potential play would be the Dallas Defense (2,800) to correlate with Elliott and hope the Rams struggle on offense. But, it's Zeke and maybe Dak for me.

When I first thought about this game, I was slightly concerned about the matchup, as I remember the Dallas defense against New Orleans on that Thursday night a month ago. When I looked closer, I see that Dallas has given up at least 20 points in every game since then. Plus, when we add the dramatic home/road splits for Jared Goff (9,200) where he is about 12 points better at home, I'm not as concerned. Goff isn't overly expensive and with Dallas giving up some points recently, I can go here and hope he got back into rhythm after throwing for 4 TD in Week 17 (though only 199 yards, Russell Wilson efficiency there). The big question is the status on Todd Gurley (11,200), as he's been limited the first two days of practice. I'm writing this as of Wednesday night, so I don't know what his official status will be. If he plays and isn't limited, I like this as he should be lower owned due to the red Q by his name on DraftKings, and the Cowboys' struggle against pass-catching backs. If he is out though, C.J. Anderson (7,000) is going to be the best value on this showdown slate, as he's put up back to back games of 26 and 27 fantasy points. The matchup isn't the best, but on volume alone, he should get to 15-16 points.

We saw Tyler Lockett have a nice game last week against this Cowboys Defense, making me think we could see a similar type of game from Brandin Cooks (7,800). He's 10 fantasy points better at home and is seeing a lot of targets at home (16 in last two home games). The price is affordable, and I would guess he won't be as popular as Robert Woods (8,200), who is averaging 17 points a game. Throw out his Week 17 line, as I think that was an outlier with the Rams not relying on him as much. He should be a factor this week, as Goff clearly trusts him. Like Woods, I wouldn't put too much stock into the 2-TD game for Josh Reynolds (6,200), who feels a little too expensive here for a #3 WR, especially if Gurley is back. Gerald Everett (2,400) was seeing about 6 targets a game prior to week 17. Dallas has shown some vulnerability against the TE, so I don't mind Everett as a nice value play. Dallas doesn't turn the ball over much, so I don't have much interest in the Rams Defense (4,600) but could play Greg Zuerlein (3,600), who does have four straight home games of having double-digit fantasy points. That would play nicely here at 3,600.