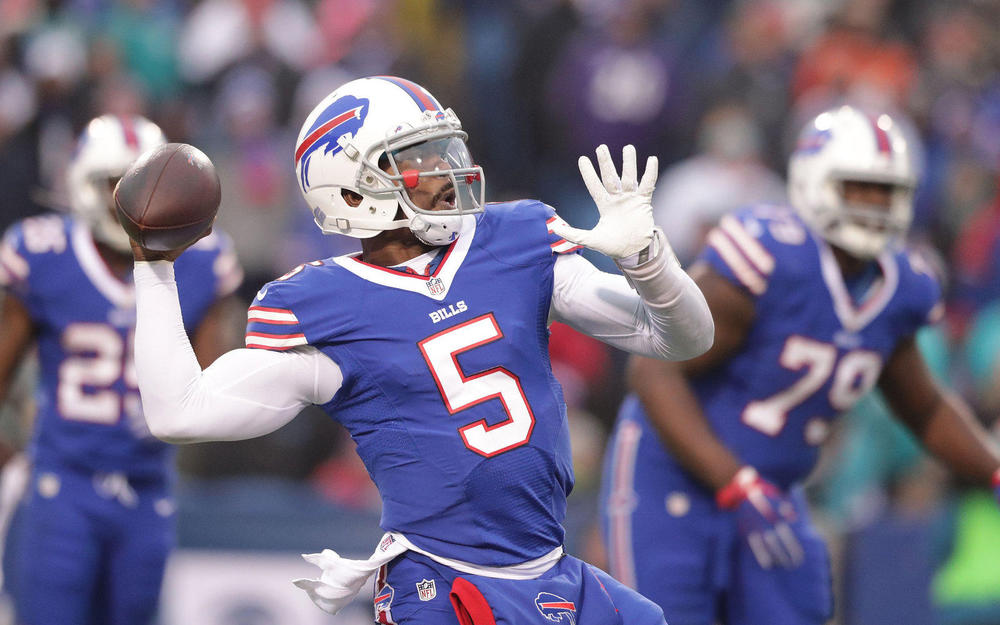 Welcome back to our weekly Matchup Report where we try to highlight a few players in favorable positions for the upcoming week. We had another strong showing in Week 6 and now we have reached the point in the season where we can really analyze the data and draw conclusions.

Buffalo Bills Quarterback Tyrod Taylor - The Bills signal caller is currently priced as the 19th quarterback on DraftKings which includes Carolina Panthers backup quarterback Derek Anderson being priced higher than him by $500. Just think about that for a second; a quarterback that has started every game this season is priced cheaper than a backup. DraftKings has tighter pricing than FanDuel so frequent readers and viewers to "Bros and Football" know I like to use cheap quarterbacks when building my lineups on DraftKings. However, I won't use cheap quarterbacks just because its salary relief as we can fall into a trap like last week when Cleveland Browns quarterback Kevin Hogan was popular due to his price.

Taylor is cheap and will help roster construction which is a plus, but he also squares up against the Tampa Bay Buccaneers. According to the My Fantasy Fix DFS Matchup Matrix, the Bucs rank 29th against quarterbacks over the last eight weeks. The only hesitation is the Bills are decimated at the receiver position as it appears Jordan Matthews may not return this week as originally hoped and tight end Charles Clay remains sidelined. However, at this price along with the matchup, I think Taylor's ability to also run the ball will allow him to hit value for the week.

Running back LeSean McCoy will be a popular choice this week and I'll be on record now stating that I will have a GPP lineup with Taylor as my quarterback and McCoy as my running back. McCoy is heavily involved in the passing game and he may very well be Taylor's number one option this week.

Los Angeles Rams Wide Receivers Cooper Kupp and Robert Woods - We highlighted Bucs wide receiver DeSean Jackson last week because he was facing the Arizona Cardinals secondary and he came through for us with a touchdown. Patrick Peterson is a shutdown cornerback and shadows the opposing team's best receiver. This week he is expected to shadow Sammy Watkins which means Kupp and Woods are in prime position to put up fantasy points. The Cardinals actually struggle more against the opposing slot receiver which is where Kupp will line up the majority of the time. Woods has been more consistent than Kupp over the last few weeks and is priced cheaper while also having the ability to stretch the field which makes him a nice option as well. Since they are priced so similar on both sites I think I will be letting my roster construction dictate which player I plug in.

Miami Dolphins Running Back Jay Ajayi - If I told you that we could roster a player at low ownership who has touched the ball at least 26 times over the last two weeks and gets a matchup against a run defense that is ranked 24th against the run over the last eight weeks according to the My Fantasy Fix DFS Matchup Matrix, would that interest you? That is where we are with Ajayi as the Dolphins take on the New York Jets. Ajayi has yet to score a touchdown and is not involved in the passing game this season which is disappointing, but the volume is there for him. If we factor in the Dolphins being a three point favorite as well, the game flow should allow the running back to once again see over 20 touches. It was only a couple weeks ago in which the Jets blew out the Dolphins at their stadium and Ajayi was an afterthought which again leads credence to him being low owned in a prime matchup. Here at MyFantasyFix.com we expect a bounce back as well as he is one of our highest rated running backs for the week.

Ready for even more DFS content and analysis? Sign up for a free seven day trial to our premium content to receive site-specific cheatsheets, in-depth position-by-position written analysis using advanced metrics and get access to our exclusive matchup matrix and target/redzone marketshare charting. Sign up here.