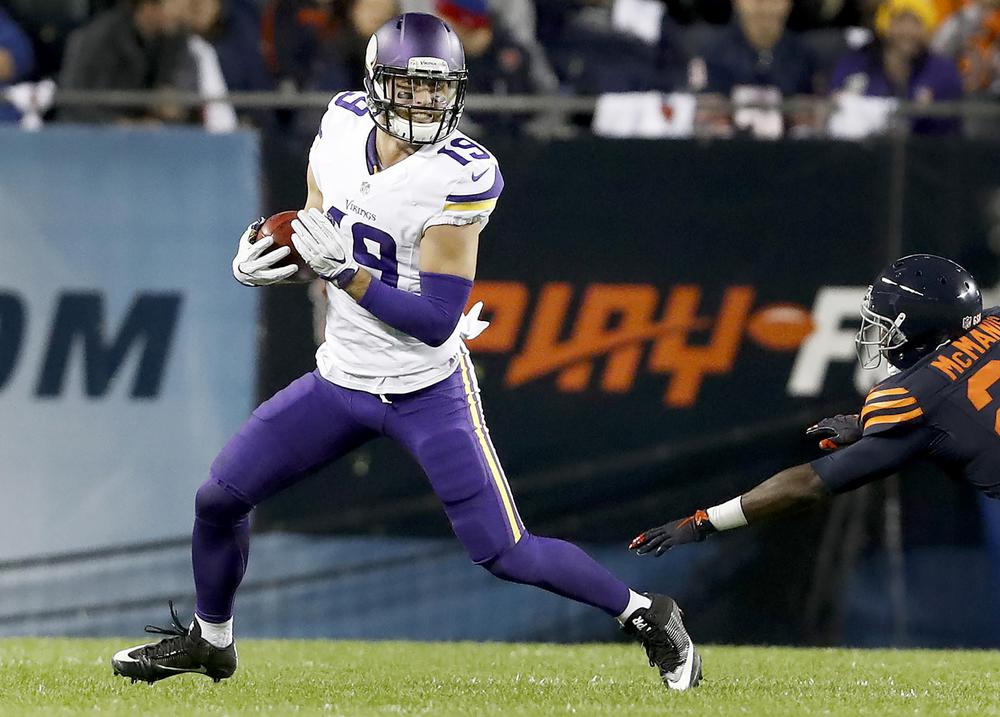 Welcome back to our weekly Matchup Report where we try to highlight a few players in favorable positions for the upcoming week. Miami Dolphins wide receiver Jarvis Landry came through for us last week, but unfortunately, his teammate DeVante Parker went down with an ankle injury early in the game which is frustrating because I really felt he could have put up a strong performance.

Like we do every week, time to forget what happened in the past and look forward to the upcoming games.

Minnesota Vikings Wide Receiver Adam Thielen - It appears quarterback Sam Bradford will be unavailable as he continues to deal with a knee injury so Case Keenum will be under center for the Vikings in Week 6. However, there hasn't been any drop off between Bradford and Keenum as the 29-year-old has actually played well when called upon this season. Thielen continues to be targeted heavily as he has had at least eight targets in four of the five games this season. I continue to highlight players going up against the Packers and it paid off last week with the Cowboys scoring 31 points.

The Packers aren't great against slot receivers and they just allowed two touchdown receptions from Cole Beasley in Week 5. I like Stefon Diggs as well, but he is dealing with a groin injury that could sideline him and Thielen's price is much more attractive on both FanDuel and DraftKings. I should also point out that Pro Football Focus is extremely high on tight end Kyle Rudolph this week so there's a strong chance the Vikings are fantasy friendly in Week 6.

Tampa Bay Buccaneers Wide Receiver DeSean Jackson - The common theme this season and one that hopefully we can continue to exploit for the remainder of the year is to target the wide receiver that will not be matched up against Arizona Cardinals cornerback Patrick Peterson. This week that receiver is Jackson as he will square off against Justin Bethel, who is graded as poor according to Pro Football Focus. Bethel allowed the huge touchdown to Torrey Smith in Week 5, and according to the My Fantasy Fix DFS Weekly Matchup Grid, the Cardinals rank 26th against wide receivers over the last eight weeks. Jackson finally had the game we have been waiting for last week against the New England Patriots as he finished with 106 receiving yards. He is priced right as his upside is too much to ignore. My only concern is quarterback Jameis Winston as evidenced last week, his accuracy can be inconsistent. The play may be there, but can Winston connect?

Atlanta Falcons Wide Receiver Taylor Gabriel - It has been a quiet season for the speedster, but that should change this upcoming week. Julio Jones is dealing with a hip injury, but is expected to play. However, Mohamed Sanu is not going to play due to a hamstring injury which means Gabriel should earn more playing time. We know the wide out can stretch a defense and when the Falcons are home, we want to target them. The Miami Dolphins have allowed big plays through the air and Matt Ryan isn't afraid to let it loose which is a check mark in favor of Gabriel. Gabriel is also cheap on FanDuel and DraftKings which makes him an appealing GPP option.

New Orleans Saints Running Back Mark Ingram - Here's the deal; Ingram and teammate Alvin Kamara are strong fantasy options this week not only because Adrian Peterson is out of the picture, but because the Saints are home. Both players are evenly priced so it will be a difficult decision on which player to roster. The "hot name" is Kamara due to him coming off a 10 catch performance which means he will be highly owned. That will be the tiebreaker for me in GPPs and if we dig deeper, we see Ingram has scored at least 10 points in PPR formats in every game. Ingram has also seen his touches per game increase in every game so he is not the forgotten man as many believe he is. Again, both are viable fantasy options, but we need to make a decision on one, and for me, I will be using more of Ingram.

Los Angeles Rams Running Back Todd Gurley - We as fantasy owners are very bias when it comes to players who let us down the week before. Gurley was "chalky" in Week 5, but was very pedestrian in a strong matchup against the Seattle Seahawks. However, if he didn't fumble at the goal line, his production along with the game could have gone a different way. Gurley gets another juicy matchup this week against the Jacksonville Jaguars. According to the My Fantasy Fix DFS Weekly Matchup Grid, the Jags rank 30th against running backs over the last eight weeks. We know we want nothing to do with the passing game when going up against the Jaguars, but we can most certainly target running backs. Gurley is involved in the passing game as well, so his performance could be similar to Le'Veon Bell's 10 catch performance last week if the game flow does dictate the Rams having to throw the ball more. Due to Gurley's poor performance last week, he could be low owned which is what we love in tournaments.