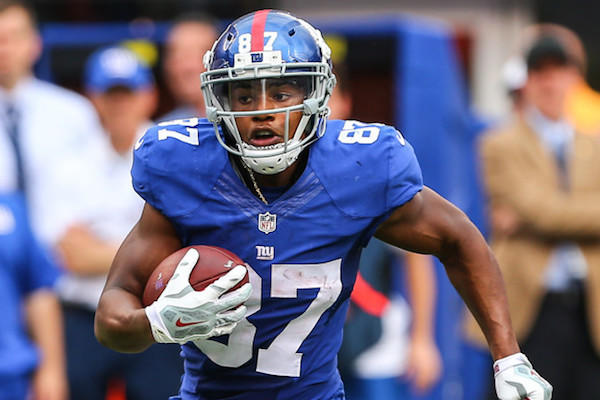 Welcome back to Week 11 of our matchup analysis where we try to highlight players who are in a favorable position for the upcoming week. It was a very disappointing week as we whiffed on all three players for the first time this season. Titans running back Dion Lewis didn't get the receptions we were hoping for which was mainly due to the fact they were leading the Patriots by so much. The Packers refuse to get tight end Jimmy Graham involved and despite scoring 34 points, wide receiver Taylor Gabriel was shut out. It was Anthony Miller who went off instead of Gabriel which is annoying. Like we do when we have a great week, we move on.

New York Giants Wide Receiver Sterling Shepard - We have picked on the Buccaneers defense all season long and for good reason. The unit ranks 31st in defensive DVOA according to Football Outsiders so the Giants offense is in a great spot. I can't recommend quarterback Eli Manning so I will get a piece of this offense at other spots which leads me to Shepard. The wide receiver is priced at $6,300 on FanDuel and $5,300 on DraftKings which makes him an appealing mid-tier target. The Bucs are awful against slot receivers as some notable performances include Jarvis Landry of the Browns catching 10 balls, JuJu Smith-Schuster of the Steelers and Tyler Boyd of the Bengals each catching 9 balls for over 100. Even Redskins slot receiver Maurice Harris had a strong performance as he caught five passes for 52 yards. Football is a funny game as Shepard had the least amount of targets and catches all season yet scored his first touchdown since Week 4. If not wanting to pay up for Odell Beckham this week, Shepard provides a nice opportunity to get exposure to an offense that should put up a solid performance.

Tennessee Titans Running Back Dion Lewis - We need to have a short memory in DFS and I'm going right back to the Titans ball carrier. The Titans take on a Colts defense this week that has allowed the third most receptions to running backs this season. Evan Silva of RotoWorld points out that the Colts have allowed 4.3 yards per carry to running backs over their last seven games. Lewis continues to out snap Derrick Henry and that shouldn't stop this week. The price tag remains intriguing for Lewis at only $4,800 and despite letting us down last week, I think the Titans running back bounces back and makes for a nice flex option.

Arizona Cardinals Tight End Ricky Seals-Jones - I can't help myself, I love the cheap tight ends and this week is no different. Seals-Jones and the Cardinals take on a Raiders defense that is ranked dead last against the position. Since Byron Leftwich has taken over as offensive coordinator, Seals-Jones has been targeted 13 times including a season high nine times in Week 10. This is as good of match-up as we are going to see for the tight end and it's encouraging it is coming a week after he was more involved in the offense. Seals-Jones checks in at only $2,900 on DraftKings and is a viable punt option if paying up for multiple studs.